The construction industry is a bellwether for the wider economy, and its strong performance in the third quarter of 2018 set the tone for UK plc as a whole.

Both delivered solid, rather than stellar, growth in Q3 2018. GDP notched up by 0.6 percent on the previous three months, the fastest rate of quarterly growth for nearly two years.

While GDP growth was buoyed by a surge of consumer spending linked to the World Cup in July, this proved a quarter of two halves. Output and consumer confidence both cooled in August and September. And the Brexit backdrop continued to chip away at business investment, which has now contracted for three quarters in a row.

Meanwhile construction sector output rebounded strongly, even if the 2.1 percent increase recorded in Q3 2018 was flattered by comparison with the first half of the year. Q1 2018 saw a decline of 1.6 percent, which was partially offset by modest growth of 0.8 percent in Q2 2018. More broadly, the construction industry continues to be hampered by a lingering unease about the future course of the economy and the final shape of Brexit.

Confidence remains low compared to where sentiment stood prior to the 2016 Brexit vote. Our latest contractor survey found only 28.4 percent of contractors expect the market to improve, compared to 42.1 percent in Q1 2016. 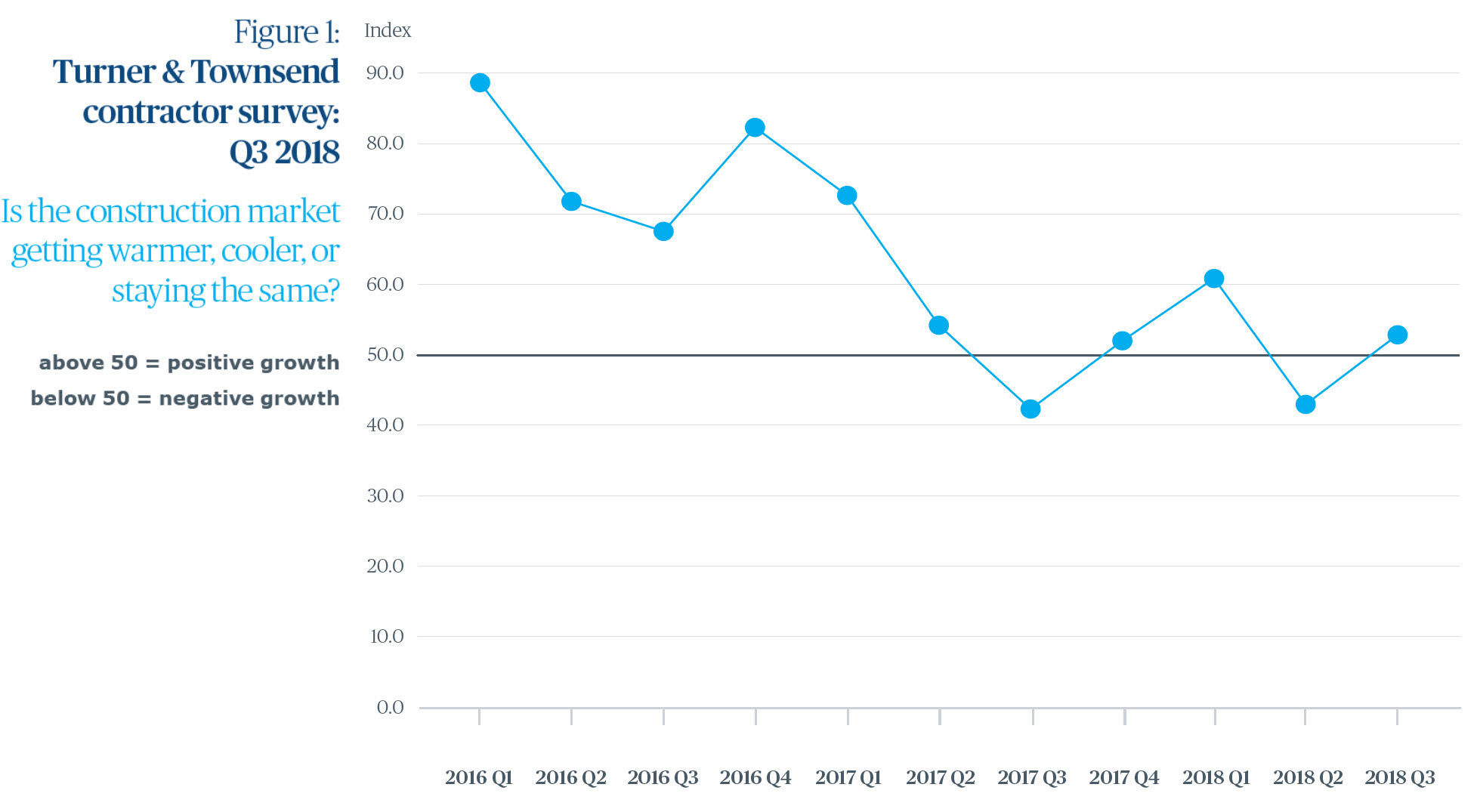 The fragility of client confidence is echoed in weak levels of demand. Official data reveals total new orders picked up by just 3.4 percent on the quarter as of Q3 2018. This modest uptick came after three consecutive quarters of falling new orders, which hardly bodes well for 2019.

Contractors too are becoming less bullish about future prospects, and this caution is being reflected in current market tendering conditions.

Half (50.5 percent) of our surveyed contractors described tendering conditions in their region as lukewarm, reporting increased competition and moderate price growth. By contrast the proportion of contractors seeing conditions as warm has fallen steadily since the Brexit referendum.

As a result, expectations for future tender price inflation are modest. Contractor responses are still largely positive, with the average rate of price growth forecast to be 1.9, 2.9 and 3.5 percent in 2018, 2019 and 2020 respectively.

Softening demand is the primary brake on the pace of growth, although labour and materials cost pressures are still sufficient in driving overall price inflation.

Similarly, labour shortages continue to nudge up salary costs, with contractors expecting them to rise 4.5 percent in the next year. Carpenters and bricklayers are the tradespeople forecast to see the highest wage increases, escalating by 4.8 percent over the coming 12 months. 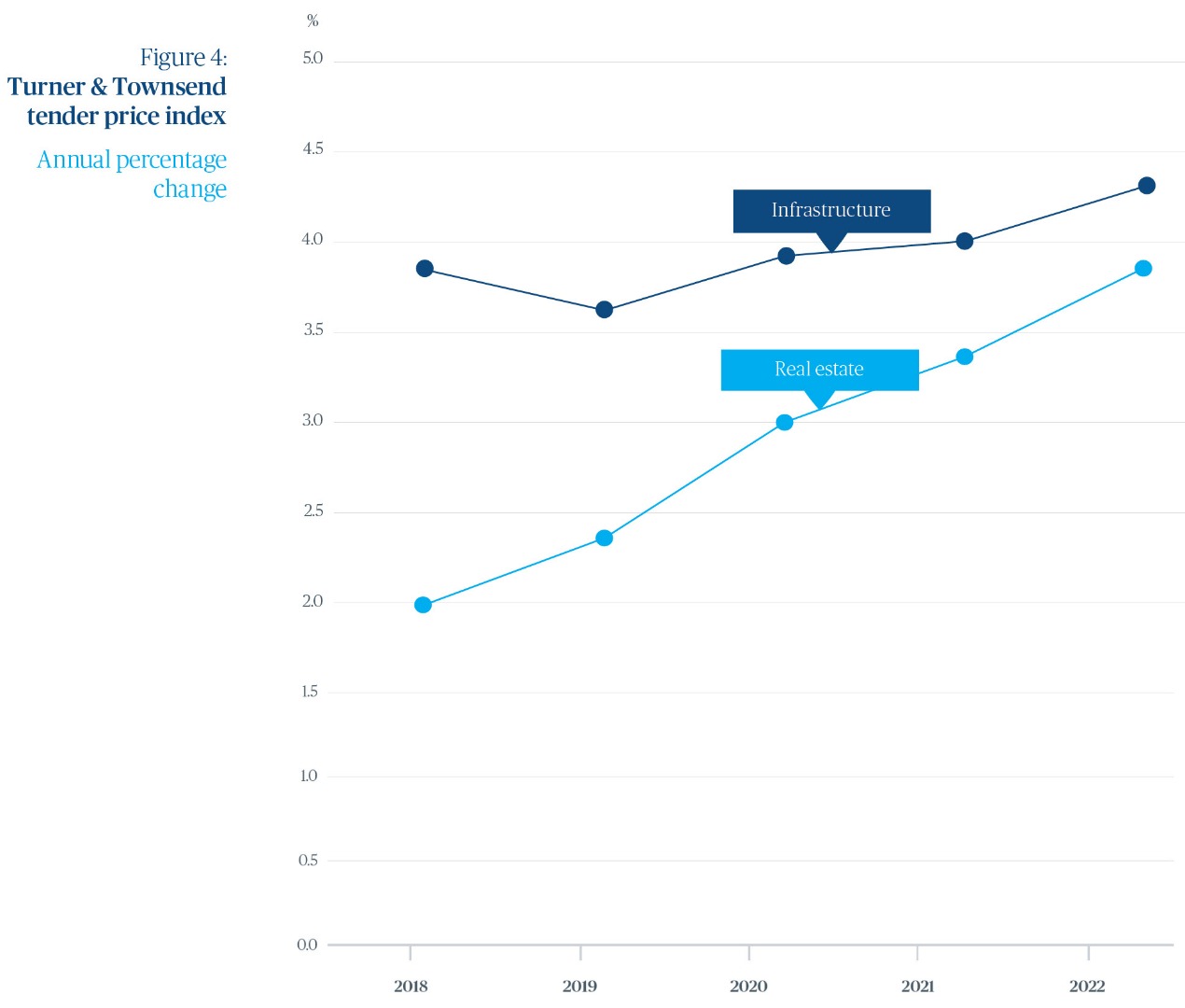 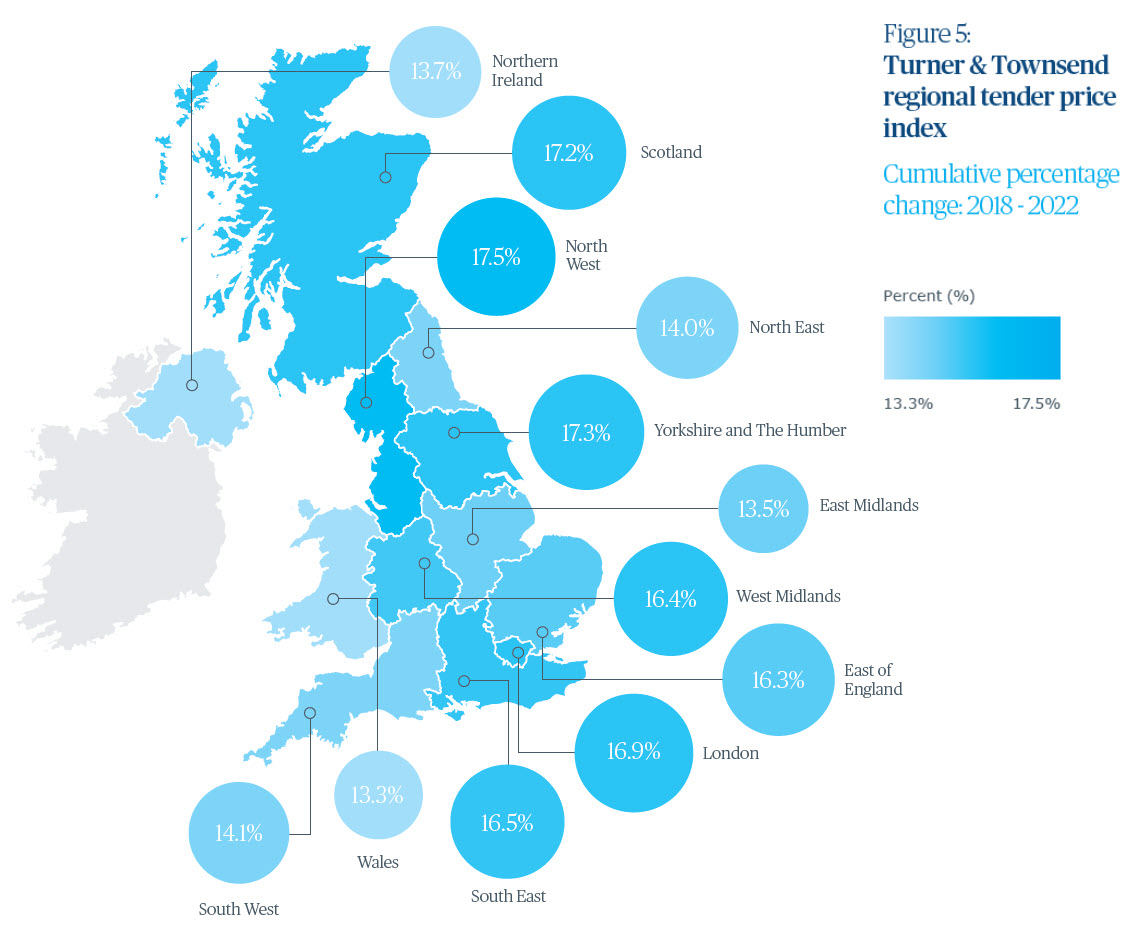 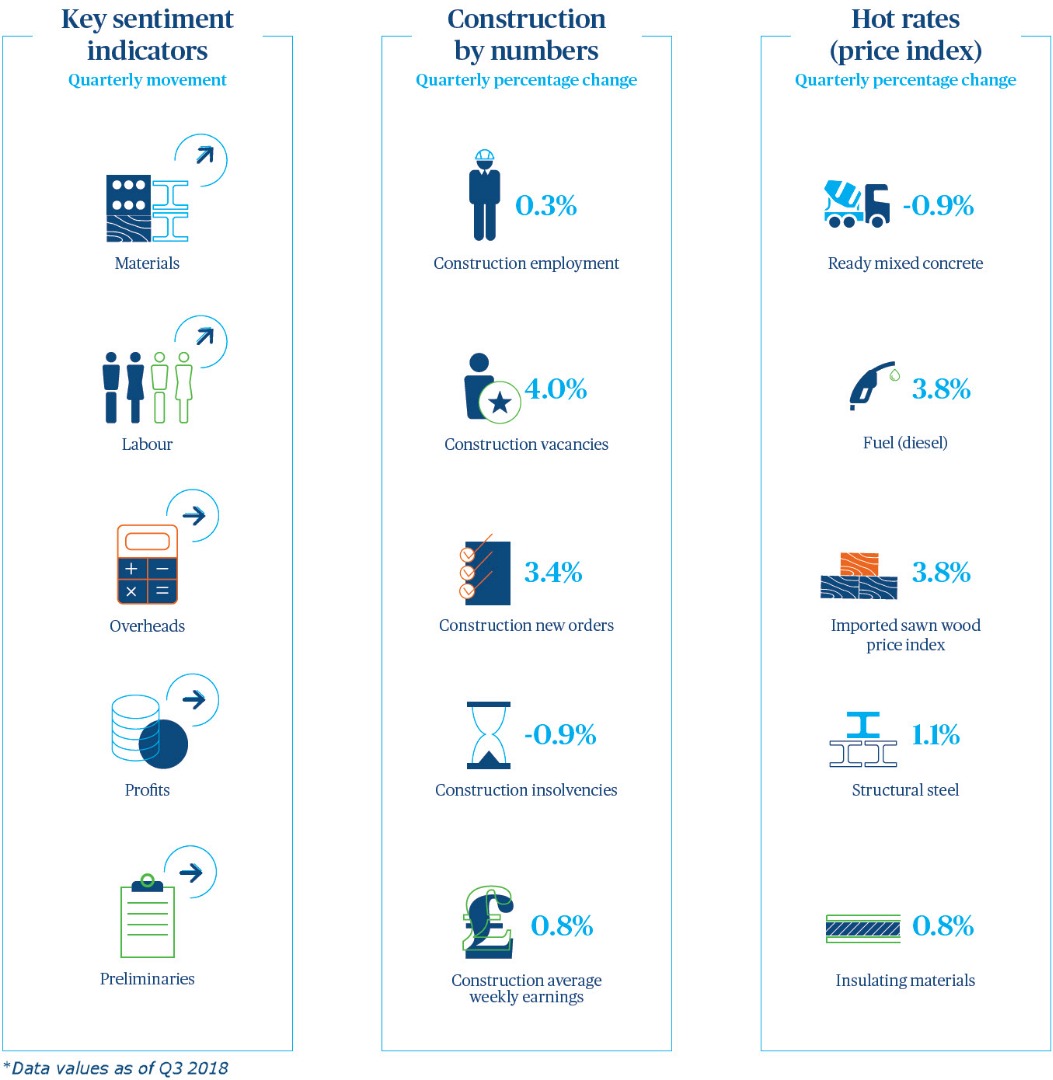 A year on from the collapse of Carillion, squeezed margins mean the spectre of insolvency still haunts the UK construction industry.

In the 12 months to the end of September 2018, the construction industry earned an unwanted accolade – the highest insolvency rate of any sector of the UK economy. 2,924 construction firms went to the wall, a 10.5 percent increase on the equivalent figure from 2017.

Construction’s casualty rate was 28.8 percent higher than the sector with the second highest number of insolvencies.

In Q3 2018 alone, 742 construction firms went insolvent - a 16.7 percent increase on the same time in 2017. This jump in the sector’s failure rate was the third biggest since comparable data was first recorded in 2011.

Weakening demand in the spotlight

While the total number of insolvencies remains lower than that suffered in the immediate wake of the Global Financial Crisis (GFC) a decade ago, the underlying cause is the same – weakening demand.

That parallel becomes apparent when new orders data is compared. After the Brexit referendum of June 2016, new order growth slowed before slipping into reverse; with one notable exception coming in Q3 2017, when a number of HS2 contracts were signed and the new order figures jumped accordingly. 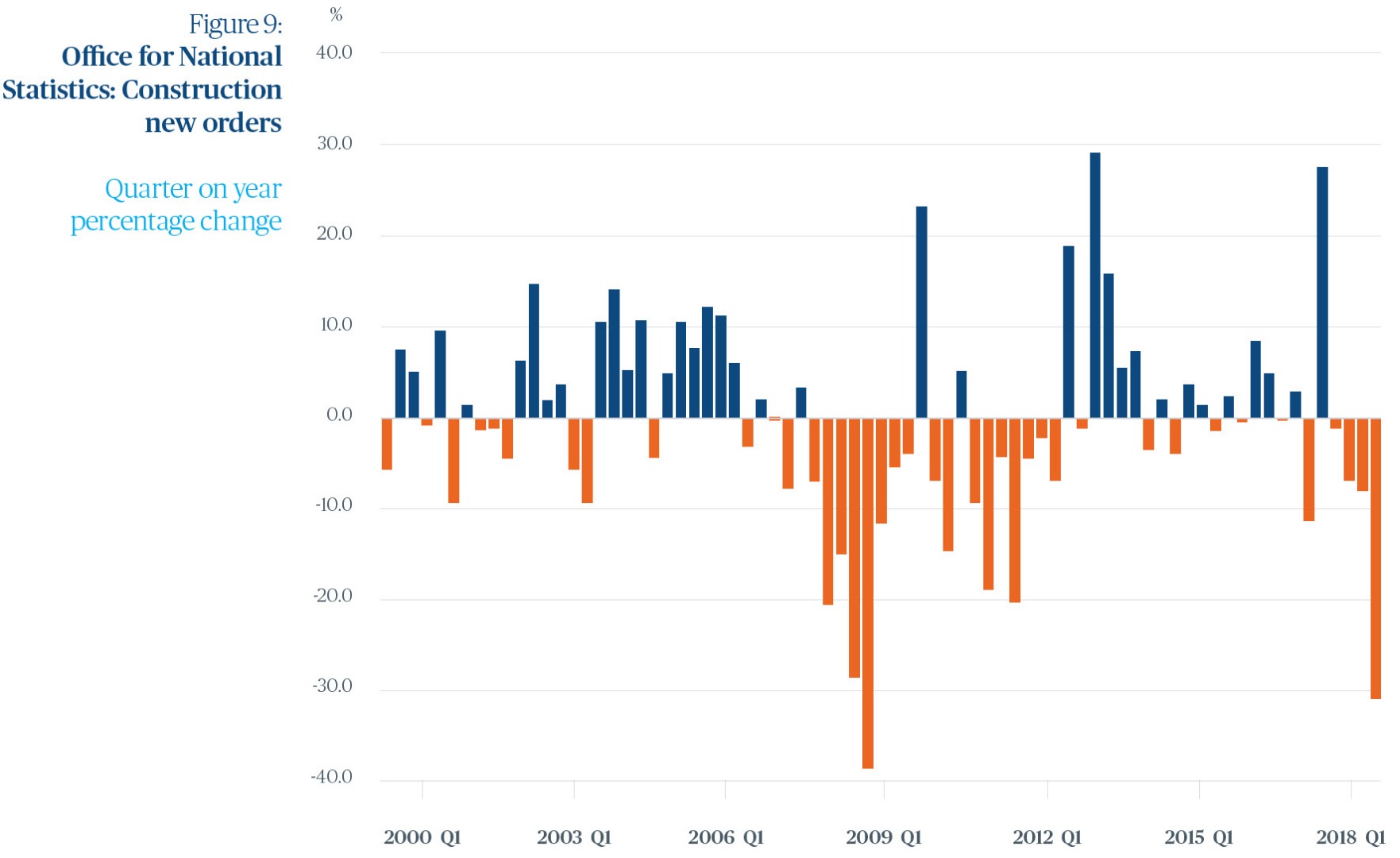 But if there is little doubt about the underlying cause for the current spike in insolvencies - softening investor demand in the wake of the Brexit referendum - the debate about the symptoms is less clear-cut.

One universal impact has been a reduction in profit levels. Our supply chain feedback reveals that contractors claim profit levels have fallen ever since Q3 2016. Despite a modest improvement since this time last year, they remain firmly in negative territory. 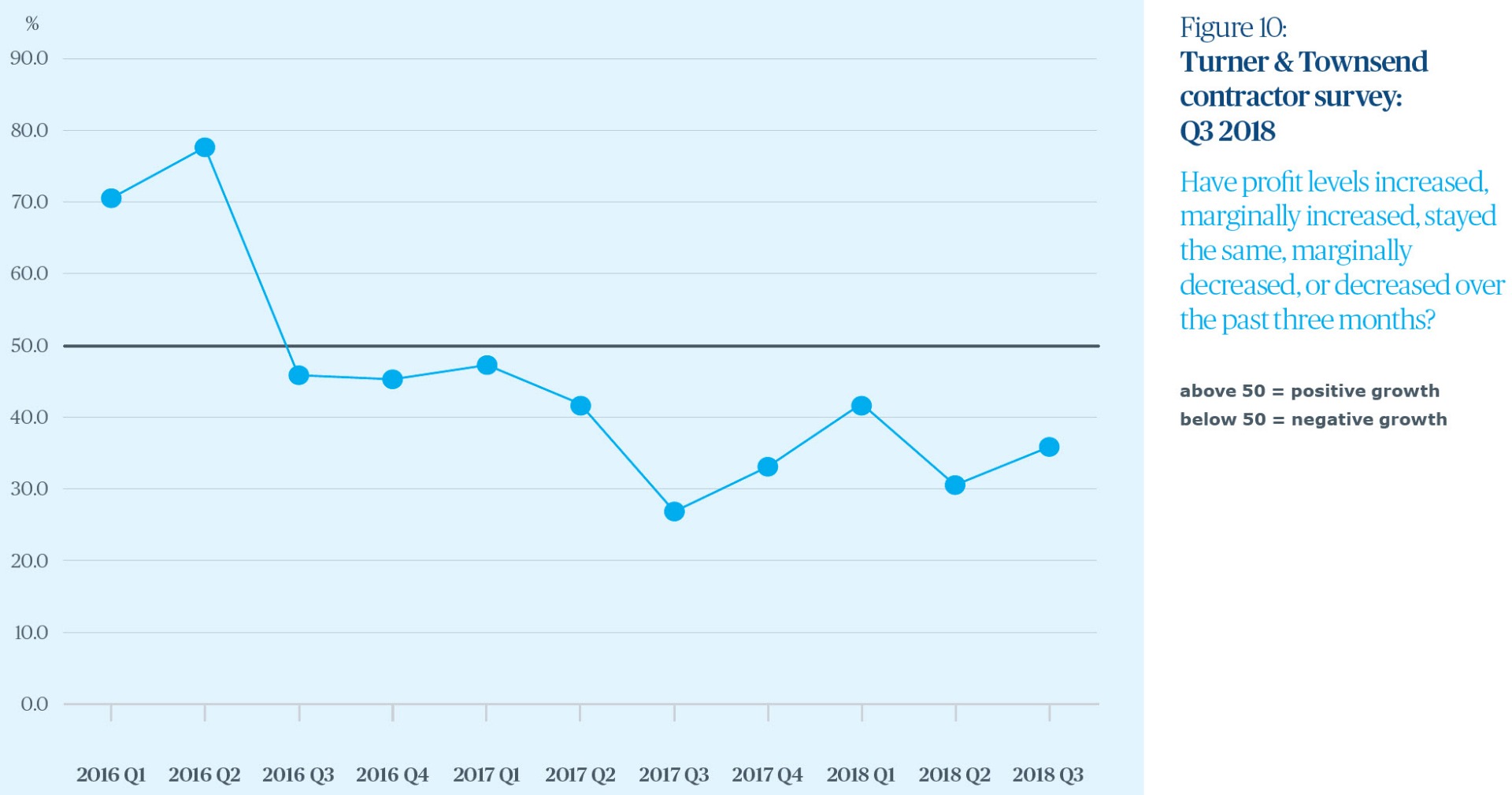 Contractors have been hit by a perfect storm of falling demand and rising input costs. With fewer new tenders available, increased competition among bidders has forced many to absorb a high degree of labour and material cost inflation.

The result has been a significant squeeze on margins right across the supply chain. Our supply chain analysis shows that in Q3, median margins for tier one contractors stood at 3.0 percent and 5.0 percent for tier two contractors.

Since the start of 2016, median tier one margins have shrunk by a quarter and tier two margins by half.

Fragile finance in the frame

Against this backdrop, several financial factors are conspiring to limit contractors’ cashflow. Research by the credit scoring firm Creditsafe revealed that construction companies are now paid an average of 40.0 percent later than they were a year ago.

This equates to an average of 21 days later than their standard payment terms. Meanwhile the financial sector is still reluctant to offer a lifeline to those struggling to pay their overheads. 86.2 percent of construction firms are only able to secure credit of less than £10,000, according to Creditsafe.

Long projects, late interim payments and a weaker pipeline of new work all force contractors to draw on their cash reserves if they are unable to secure finance. Given that some may have bid dangerously low to secure the work in the first place, the combination of thin margins and restricted cashflow can often be deadly.

The omens for the future are not encouraging either. Our analysis of company results data, compiled by the accountancy firm EY, projects that 2018 will see British construction firms issue the highest number of profit warnings since 2014.

When Carillion collapsed in January 2018 it had debts of £1.5bn. While the sheer scale of its downfall made it exceptional, the factors that led to its demise were not. Late payments, wafer thin margins and high levels of project risk hampered its ability to service its debt pile. Together, these factors ultimately tipped it over the edge of the abyss when creditors lost patience.

Fast forward to January 2019 and there is intense speculation about solvency across the construction supply chain. Contractors large and small face similar challenges to those that brought down Carillion. With Brexit uncertainty still leading clients to defer investment decisions, construction’s insolvency crisis is likely to get worse before it gets better. 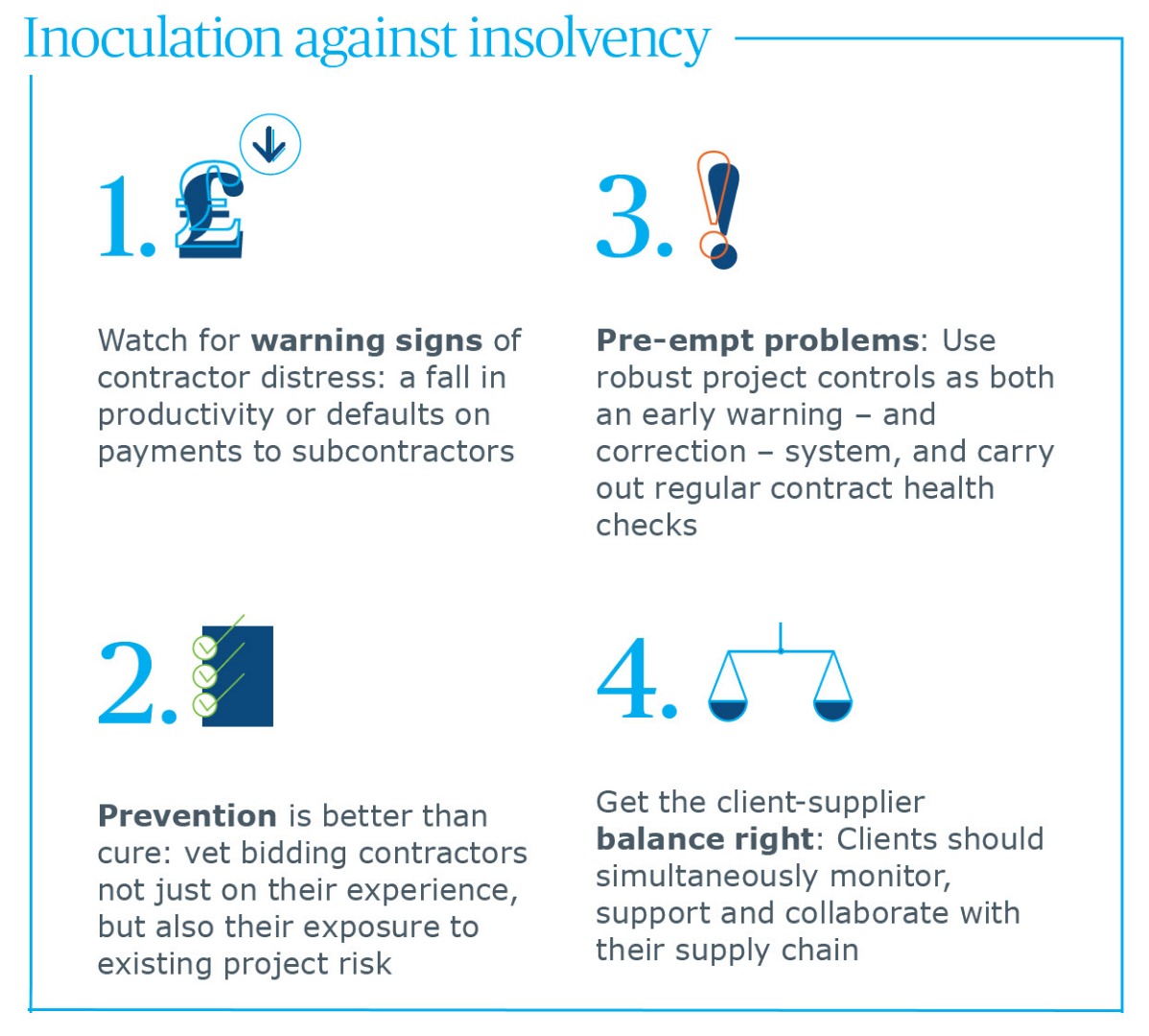 Clearly contractors are unlikely to volunteer to a client that they are struggling with cash-flow. But there are a number of tell-tale signs that can reveal all is not well with a supplier.

These can range from the operational – such as a fall in productivity or the contractor reporting unexplained difficulty in securing labour or materials – to the financial.

If the lead contractor is defaulting on supplier or sub-contractor payments, or seeking to renegotiate early payments for itself, there is likely to be an underlying solvency issue.

There has never been a time when due diligence of a prospective contractor was unimportant. But the stakes have been raised by a number of current factors. For starters, contracts agreed at a time of low demand and high tender competition tend to be priced low, and transfer a higher than usual degree of project risk onto the contractor.

Equally the recent trend for joint ventures and highly complex projects – such as those with DBFO (design, build, finance and operate) procurement – mean clients need to be mindful not just of their own contractual obligations, but also those imposed on their contractors.

While in theory such contracts spread risk around, in practice their complexity can leave contractors saddled with exposure to pressures from outside their comfort zone.

Against this backdrop, it’s as crucial for clients to vet bidding contractors for their exposure to existing project risk as it is to assess their past project expertise and experience.

The tendering process should include the checking of bidding contractors’ references, as the service a contractor gave to previous clients is a valuable indicator of their future performance and work ethic.

By the same token, procurement teams should look beyond low cost to ascertain the value offered by competing bids. The prequalification process should factor in the financial security of the bidding firm, awarding bonus marks to those which can offer parent company guarantees or performance bonds.

Project controls should be both an early warning – and correction – system. Project managers must maintain accurate and up-to-date progress and defect reports, tracking all activities against the construction programme and documenting key milestones.

In addition, project teams should carry out regular pro-active health checks, reviewing contractual procedures and confirming that contracts are fully signed and agreed, and that bonds are in place.

If a contractor does become insolvent, speed is of the essence; clients will need to engage legal advice quickly. Steps should also be taken to secure the site to prevent removal of plant or materials, and a full valuation of the works should be undertaken immediately – as in the event of a legal dispute this is often the most contentious issue.

4. Getting the balance right

While clients need to be alert to any signs of contractor distress, the most astute will simultaneously monitor, support and collaborate with their suppliers.

In practical terms, this means re-running credit checks and challenging suppliers on their ability to continue delivering, while also seeking to understand and allay their concerns.

However clients should not rely on simple questioning of the supply chain alone. Instead they will need to conduct an empirical analysis of each supplier’s earned value, and to bring in expertise in the management of the whole supply chain – right down to Tier three suppliers.

Done right, this approach can establish the financial robustness of the supply chain while also strengthening the relationships within it.

Ultimately the goal should be for clients to work collaboratively with their supply chain, putting an arm around their contractors while at the same time keeping vigilant for any sign of weakness.

2019 is not 2009, but clients must shelter from the chill winds of insolvency.

One year on from the collapse of Carillion, it can be easy for clients to slip into complacency. Carillion’s size may have made it an outlier, but many of the stresses that caused its demise continue to be felt across the industry and will inevitably claim other casualties.

While the financial landscape of 2019 is unrecognisable compared to that of 2009 – with contractors able to bolster cash-flow with finance from a range of bank and non-bank lenders that didn’t exist a decade ago – the chill winds of insolvency are once again blowing through the construction industry.

A decade ago the industry was hit by a perfect storm; a sharp fall in new orders, slashed contractor margins and a near shutdown in the availability of finance, which together resulted in a grim toll of insolvency.

Fortunately there is nothing inevitable about such chain reactions. The drop in demand seen since the EU referendum has been slight in comparison to 2009, and the better availability of finance has so far mitigated the number of contractor casualties.

Nevertheless if Brexit paralysis continues in 2019, it could trigger a broader economic slowdown, and clients will need agile and alert project management to protect themselves from a renewed threat of contractor insolvency blowback.